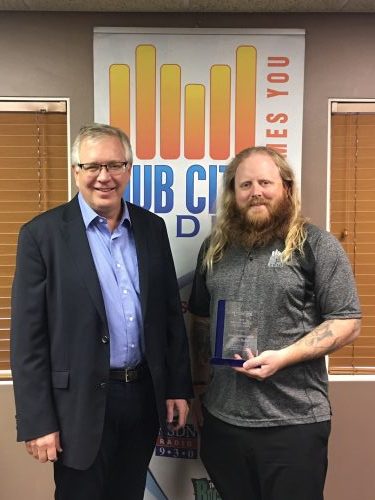 Jason Schaunaman has been chosen the “2019 Broadcaster of the Year” by the South Dakota Broadcasters Association (SDBA).  Steve Willard presented the award to Schaunaman among his peers at Hub City Radio in Aberdeen on Thursday, October 10, 2019.  The award is given to Broadcasters to recognize extraordinary community service.

Schaunaman, on-air as Rusty Rokit, has been at Hub City Radio in Aberdeen for 12 years. His community service accomplishments include: working at the Power of Hope Radiothon which has raised hundreds of thousands of dollars for the Children’s Miracle Network over the years. He’s been the announcer at the Brown County Speedway, done countless on-stage introductions for community concerts and events, and has helped the Brown County Fair with input on bands and bringing rock music back to the fair. He served on the planning committee for a pair of Rockfest Concerts bringing out thousands of people both years. Plus he’s been involved with events for the Aberdeen Downtown Association, Special Olympics, Battle of the Badges Blood Drive, and has enthusiastically gone to the dunk tank during the annual downtown event welcoming college students back to Aberdeen. This year, Rusty was awarded the Northeast South Dakota Readers’ Choice Award for Disc Jockey, in its first year. Away from the microphone, Jason served on the Aberdeen Area Bowling Association Board from 2007-2016. He is also the youngest member inducted into the Aberdeen Area Bowling Association Hall of Fame.