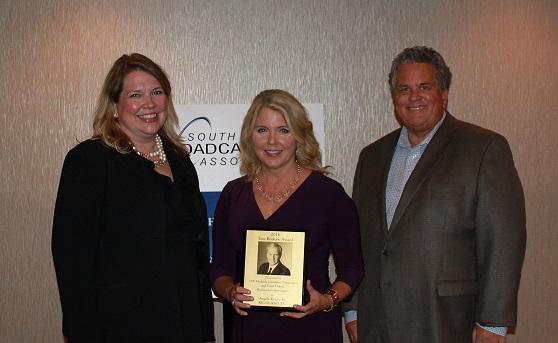 Angela Kennecke, Investigative Reporter and Anchor at KELO-TV received the 2016 Tom Brokaw Award at the South Dakota Broadcasters Association Annual State Leadership Conference held July 21 & 22, at the Hilton Garden Inn Downtown Sioux Falls.  The Award is given by SDBA and the USD Department of Media and Journalism to recognize excellence in broadcasting and public affairs. In addition to the recognition, Kennecke’s name will be added to the permanent display of past winners housed at the Al Neuharth Media Center at USD. The first recipient was former NBC News anchor Tom Brokaw in 1981.

Kennecke has made many important contributions to South Dakota broadcasting in her 27 years at KELOLAND Television.  But her investigative work in 2016 of the GEAR UP Grant program, the SD Developmental Center in Redfield, and Lifescape in Sioux Falls are among the most significant and resulted in the award. Her investigative work and series of stories increased public awareness of significant issues, created legislative change, increased organizational accountability, and resulted in the resignations and criminal charges of several connected officials.