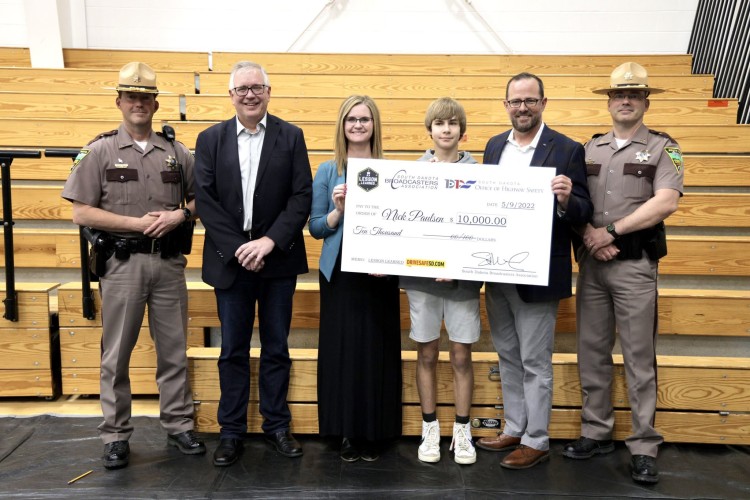 Nick Paulsen was announced Monday as the winner of this year’s Lesson Learned SD program during an all-school assembly in Montrose. The program is sponsored by the South Dakota Office of Highway Safety and the South Dakota Broadcasters Association. This is the sixth year for the program.

“We see too many fatal vehicle crashes involving youth drivers. The Lesson Learned program is a way for us to encourage young drivers to start using the habits that will help make them safe drivers,” said Department of Public Safety Cabinet Secretary Craig Price. “Those young drivers can carry on those safety habits throughout the rest of their lives.”

Students answered safe driving questions on the Lesson Learned SD website and were entered into the drawing. This year, there were 3,374 entries from 142 South Dakota high schools.

“We could never do Lesson Learned without the support of administrators, teachers, and driver education instructors who encouraged their students to participate,” said Amanda Kurth, director of the Office of Highway Safety. “Montrose had 34 students enter the contest; which was one of the highest school participation rates in the state.”

Nick’s school also benefits. The Broadcasters Association contributes another $10,000 for Nick to designate to school programs or activities of his choice.

“Giving the school another $10,000 has become one of the best parts of this program,” said Steve Willard, president of the Broadcasters Association. “Not only is the winner rewarded for pledging to be a safe driver, but so is their school. It is a win-win.”

South Dakota’s Office of Highway Safety is an agency of the state Department of Public Safety.

The Lesson Learned website can be found at: https://drivesafesd.com/lesson-learned/.