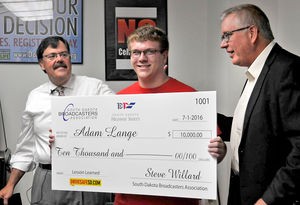 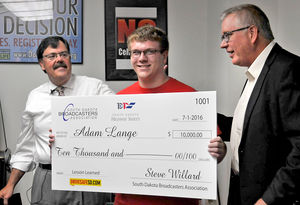 Adam Lange was worried about losing his new driver’s license when he was summoned Friday to the Yankton exam station.

The Yankton High School student was presented the check as the winner in a statewide program aimed at preventing distracted driving among teenagers. The program, named “Lesson Learned SD,” allowed entrants to watch online safety videos, answer a quiz and enter a drawing.

“I didn’t have any idea why I was called down to the DMV (Division of Motor Vehicles) and told that they had to issue me a new driver’s license,” he said. “They had me scratching my head because I wasn’t sure what happened.”

When he arrived at the exam station, Lange stood in line with Lt. Gov. Matt Michels of Yankton, who said he was waiting to renew his license. The teenager was called to the counter, where he tried to discover the “problem” and get a new license.

Lange returned to the waiting area, where Michels greeted him with the large ceremonial check and 10,000 reasons to fight distracted driving.

A surprised Lange welcomed the money. However, he admitted worrying about the initial phone call and whether he would lose his license.

“I wasn’t happy about it at the time,” he said, now sporting with a smile.

Lange drives the family car and intends to save the $10,000 for college rather than immediately spend it on his own car. He plans to attend the University of Dakota and major in music.

He doesn’t take his driving privileges lightly. He admitted he failed his first driving test but came back to pass it. He says he practices safe driving at all times.

South Dakota drivers between ages 14-19 were encouraged to watch all three videos and answer the follow-up safety questions. Those who did were entered in the contest to win cash prizes. Lange was one of 2,232 eligible entries.

“The campaign targeted teenage drivers because they’re just learning to drive. And the videos that Adam and all the other entrants watched provide a powerful message about the dangers of distracted driving,” said SDBA executive director Steve Willard.

“Any viewer comes away understanding that driving is a responsibility to be taken seriously. Now, if we could only get South Dakota adults and parents to learn the same lesson.”

Lange said he didn’t think he would win and was surprised to claim the $10,000. “I didn’t know what to expect (when I entered), but I decided to go for it,” he said.

He learned valuable lessons along the way, including the fact that traffic deaths occur even at slow speeds. He finds it frustrating to see others texting while driving, even though it’s an offense under South Dakota law.

“When you text and drive. It won’t end nice for you,” he said. “You also need to wear your seatbelt for safe driving.”

Distracted driving can cause accidents even when vehicles aren’t moving, Lange said.

“(Drivers) may be texting or checking their phone at a stop light and don’t realize the light has turned green,” he said. “They could get hit from behind because that driver (of the second vehicle) didn’t know the first vehicle was still stopped and not moving.”

“When I got the phone call at home (from Willard), I thought it was a scam,” she said. “But after a while, I started to think it was real.”

The Langes try to set a good driving example for their children. Cindy Lange noted they require seatbelt usage and gave examples of how they dealt with driving distractions.

Still, she remained stunned at her son’s good fortune in winning the $10,000. “It’s doesn’t seem real. It’s a life-changing thing,” she said.

The theme of life-changing moments ran throughout a press conference following the presentation.

“I saw a lot of things you can’t un-see,” he said. “There are a lot of people who aren’t hugging others back because they died (in an accident).”

A combination of alcohol, speed and not wearing a seatbelt were part of nearly every one of the 130 fatalities that occurred last year on South Dakota roads, Michels said. Despite those statistics, drivers continue to engage in deadly actions, he said.

“What’s disturbing is that distracted driving is increasing, especially among youth,” he said. “I was just driving around town, and 50 percent of the people were on their cell phones. And every other person wasn’t wearing a seat belt.”

“Contrary to what people think, New Year’s Eve isn’t the highest time for drinking — it’s Independence Day weekend that we’re now entering,” he said. “It’s when many people lose their loved ones.”

Fatal accidents affect more than just the victims, Michels said. “It’s their families, friends and those who had to respond to the scene,” he said.

Law enforcement officers are targeting impaired driving through saturation patrols and sobriety checkpoints, Michels said. In addition, authorities are cracking down on boating violations, he said.

Lee Axdahl, director of the state Office of Highway Safety, says “Lesson Learned SD” was a success in its first year. Plans are being made to offer the program again. The power of the program’s message never diminishes, he added.

“As we enter the Fourth of July holiday weekend, we know, unfortunately, that there is a chance many motorists may not make it through the holiday because of a motor vehicle crash,” Axdahl said. “We want motorists to be safe, and this program is helping students learn that at an early age.”

In that respect, the Langes provide a good role model, Michels said.

“Adam’s mom and dad have taught him the right way,” the lieutenant governor said. “Adam, as part of this, you’re carrying a message to your friends. Thanks for participating in this program.”

Cindy Lange hopes her son’s example will save lives and that he continues promoting traffic safety.

The message needs to be heard continuously because the stakes are so high, she said. “In a split second, you could change so many lives. A lot of people could be affected,” she said.

Two-thirds of those killed in South Dakota vehicle accidents weren’t wearing seatbelts and were often ejected from their vehicles, Axdahl said.

Drunk driving has become a growing problem, Willard said. “One of 17 drivers that pass you on the road has had a DUI (driving under the influence),” he said.

“The DPS learned it couldn’t have awarded the grand prize to a better kid. He’s articulate in what he says about the lessons learned,” he said. “Kids learn what you teach, and kids teach their peers. We may use Adam in the future (for messages).”

In the process, Adam hopes he helps save a life, including his own.

“I feel it’s really important that drivers understand that wearing seatbelts is really important,” he said. “And I can wait to text my friend. No text message is a matter of life and death.”