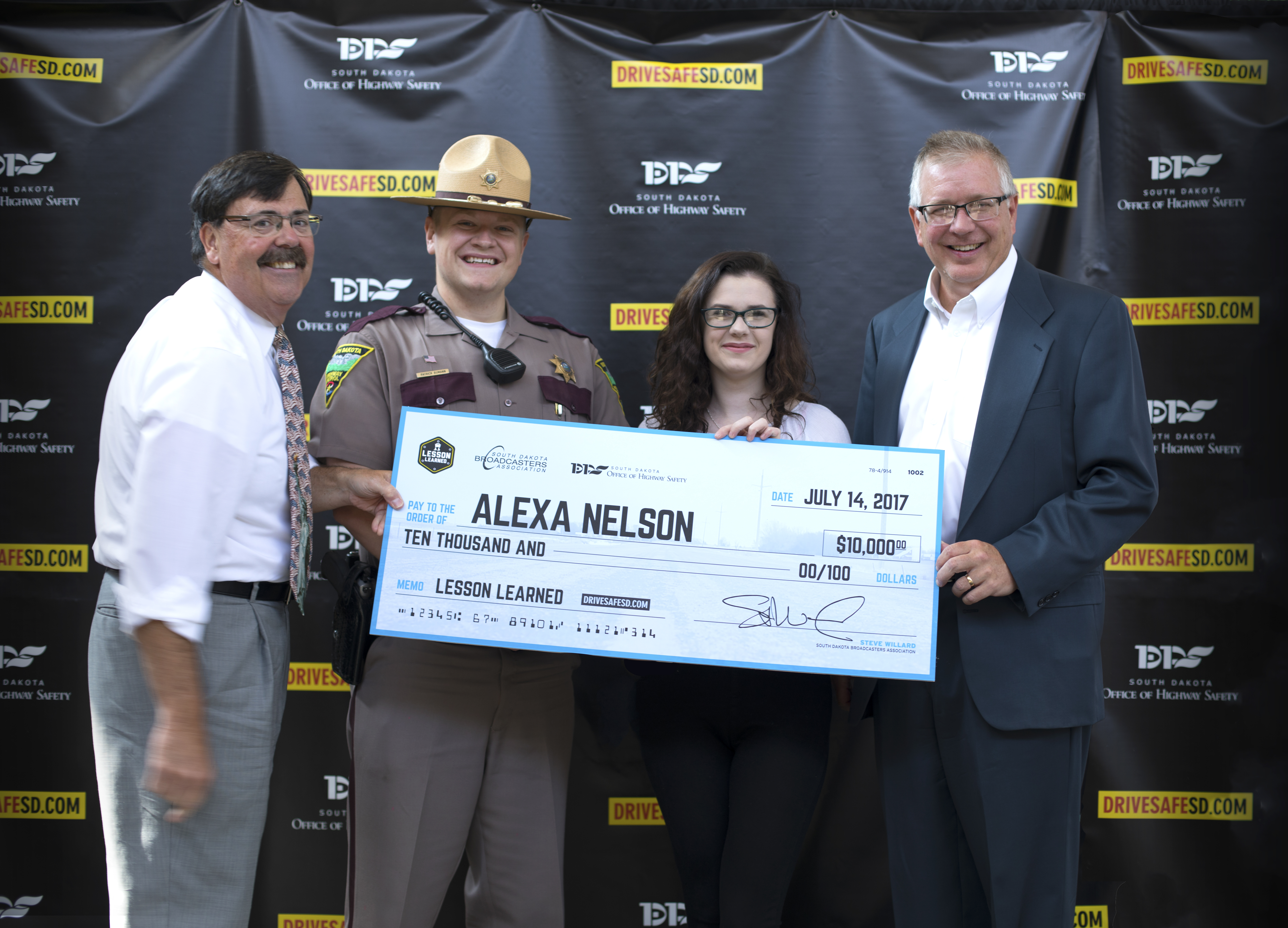 PIERRE, S.D. – A Sioux Falls Roosevelt High School student is $10,000 richer for being chosen the winner of a program that encourages driving safety among young people.Alexa Nelson,16, Friday was announced as the winner of this year’s “Lesson Learned SD” program during a ceremony at the Sioux Empire Mall in Sioux Falls.  The South Dakota Office of Highway Safety designed the program to encourage young people to be safe drivers. The cash prizes are sponsored by the South Dakota Broadcasters Association.

Lt. Gov. Matt Michels participated in the surprise ceremony for Alexa held at the mall’s Center Court. Lt. Gov. Michels says while the money is nice, the program is really about encouraging young drivers to be safe drivers.

“Since July first, official statistics indicate five lives have been lost on our roadways and none were wearing seatbelts,” says the Lt. Governor. “As an EMT and an emergency room nurse, I have seen the toll motor vehicle crashes inflict not only on those involved in the crash, but their families as well. For the sake of those who love you, please buckle up and drive safely.”

The “Lesson Learned SD” website featured safe driving videos on issues such as distracted driving, seatbelt use and driving under the influence.  South Dakota young drivers, between the ages of 14 and 19, were encouraged to watch all three videos and answer the follow-up safety questions. Those who did were entered in the contest to win the cash prizes. Alexa was one of 2,539 eligible entries.

“This was the second year for the program and we had even more students participating than last year,” says South Dakota Broadcasters Association executive director Steve Willard. “Those stories are real, powerful and compelling. I wish everyone would see them, because if they did; they’d wear seat belts from then on. Kudo’s to the kids for speaking the truth.”

Thanks to Alexa being chosen, her high school, Sioux Falls Roosevelt, is also a winner. The Broadcasters Association has contributed another $10,000 that Alexa can designate to school programs or activities of her choice.

“The ‘Lesson Learned SD’ program has made a tremendous impact in only two years,” says Lee Axdahl, director of the State Office of Highway Safety. “This program played a part in South Dakota having the second lowest total of motor vehicle fatalities ever in 2016 and we are ahead of that rate so far this year. Being a safe driver is a life skill and we want drivers to start using that skill as early as possible.”

The Lesson Learned website can be found at: https://www.lessonlearnedsd.com/student/.