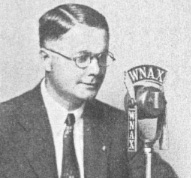 The small town of Yankton, in the southeast corner of South Dakota, spawned one of the most distinctive and most spectacular radio stations in the United States. The station was WNAX. This is the station which at one time refused to sell air time to merchants who wanted to advertise; the station which was primarily responsible for the success of a young and hungry Lawrence Welk; the station which pioneered in direct sales to customers on a mail-order basis; a station which as early as 1928 had its own concert orchestra acclaimed as one of the finest in the country ; and a station which helped elect one of its managers to a two-term seat in the U. S. Senate. Two men fresh out of army service in the first World War—were responsible for starting WNAX. They were E. C. “Al” Madson, and Chan Gurney, whose father was president of the Gurney Seed and Nursery Company. These two men started “playing around” with radio in 1921. Madson had studied engineering at the University of Minnesota, and following his war service returned to Yankton to start the Dakota Radio Apparatus Company, distributors of Crosley radios. A close friend was Chan Gurney, who was working for his father and uncles in the nursery business. The two men developed a rather crude broadcasting station by combining some Condensers, batteries, and wires strung across the roof of Madson’s warehouse on Walnut Street just north of Third Street. For a microphone, Madson used a “morning glory horn” which had been removed from an Edison phonograph. This first studio was one floor above a small restaurant. Madson and Gurney placed a test radio receiver in the restaurant one evening while working on their transmitter, a while later, using their improvised microphone, they ordered sandwiches and coffee. The cafe owner came up a few minutes later to deliver their order, and this was their first evidence that the contraption worked.

The station was first licensed in November, 1922, with Madson as president and chief engineer. The station sold no air time, so had no revenues. After about three months on the air, WNAX ceased operations and put the equipment in storage. Madson went back to his regular business, and Gurney went on to become secretary and treasurer of the seed and nursery company. WNAX might never have been revived except for an incident which occurred in 1927. The Henry Field Seed Company, strong competitors of the Gurney Company, had purchased time on KFNF, Shenendoah, Iowa. Field went on the air each day to talk about the merits of his grain seeds, and the farmers bought. Gurney sales were deteriorating, and Chan Gurney thought that their competitor’s use of radio was the reason. He went to his father and suggested that the company buy Al Madson’s license and do the same thing. The Gurneys paid Madson $2,000 for the license, with its frequency of 570 kilocycles. The contract also called for the Gurney company to buy any new equipment which might be needed and that Madson was to be responsible for setting up the studio and transmitter. The studio was built in the home of D. B. Gurney. The station returned to the air in 1927—probably in March or April. Chan Gurney, later to become U. S. Senator from South Dakota, was the station announcer all day and every day for the first few weeks. All programming was live, with local singers, musicians, and guitar players. All of the advertising messages concerned Gurney products.

The station was an immediate success, and the Gurney business curve started upward again. By the fall of 1928, the station had a staff of 25 to 30 salaried musicians. Gurney’s Concert Orchestra received a plaque from Radio Digest magazine as the most popular radio orchestra in America in 1927-28. In addition to the staff musicians, WNAX gave air time to traveling groups of musicians who passed through the area on small-town dance dates. One of these five-piece orchestras was headed by a young accordionist from North Dakota named Lawrence Welk. He played often on WNAX, and his appearances on the station gave him the public exposure he needed to get well-paying dance jobs in the Middle West. The station’s power gradually was increased though the purchase of a 1,000-watt Western Electric transmitter in 1928. The station went to 5,000 watts in 1933.

WNAX in this early period was a “mail order” station. The staple business continued to he seeds and plants, but the company also advertised and sold, through the mails, numerous other products for the farm and home, including baby chicks, hog feeds, overcoats, overshoes, radio sets, Gurney tires and automotive supplies, and many other items. In addition, the company developed the WNAX Gasoline brand name, and at one time had 578 gasoline stations throughout the upper Midwest. During the noon hour each day, D. B. Gurney would go on the air to chat with farmers about crop conditions, farm economics, and farm politics. He also would editorialize on these matters, expressing his personal viewpoint. For example, he was dead set against the manufacture and sale of oleomargarine, which competed against the butter being produced by dairy farmers in his listening area. This editorial campaign was a success, as indicated by the fact that the South Dakota legislature passed a special tax on the sale of oleomargarine in the state. The law has since been reversed.

The mail order concept of broadcasting remained in effect at WNAX until the fall of 1932. At that time, a disagreement developed in the family-owned business relative to the sale of air time to other merchants and services. Chan Gurney wished to continue the release of CBS network programs, but retain most of the other broadcast hours for the advertising of seed and nursery products. His father, D. B. Gurney, who was company president, felt the company should serve other com-mercial interests. As a result of this difference of opinion, Chan Gurney sold his interests in the family enterprises and went into private business and later politics. He served as U. S. Senator from South Dakota from 1939 to 1951. During the following 14 years—from 1951 to 1965—he was a member of the Civil Aeronautics Board in Washington. He now is retired and living in Yankton. The Gurney company continued to operate WNAX until November 1st, 1938. when the station was sold to the Cowles interests of Des Moines, Iowa.