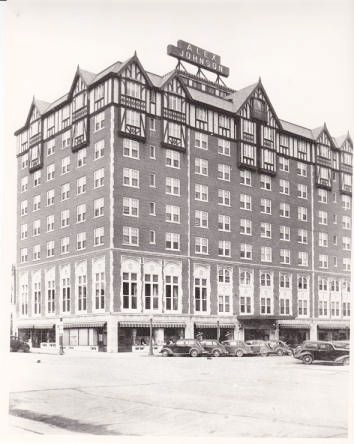 The first radio station in Sioux Falls was WFAT, built and owned by the Sioux Falls Argus-Leader in 1924. About a year after this station went. on the air, the newspaper donated the station and all its equipment to Columbus College, a parochial school in the city. The college (no longer in existence) operated the station until 1926, when it went off the air.  The oldest continuously operated station in Sioux’ Falls is KSOO. It went on the air in 1926 from studios located in the Manchester Biscuit Company plant; now the site of Raven Industries. The original owners were B. M. “Bram” McKenzie, who had the distributorship for Crosley radios, and Cy Rapp. The station had 100 watts of power, but later increased its output to 2500 watts and in 1951 to 10 kilowatts.

Since 1927, KSOO has been managed by Joseph Henkin and his son, Morton H. Henkin. The elder Henkin went to Sioux Falls in 1927 after purchasing a major interest in the station. Prior to that, he operated a clothing store and amusement park in Madison, S. D., and had been a city commissioner there. In 1937, Joseph Henkin and a partner, Sam Fantle, started KELO, the city’s second radio station. At that time, KSOO and KELO operated joint studios at 315 South Phillips Avenue. In April, 1946, Fantle bought controlling interest in KELO and started construction of new studios at the corner of Eighth and Phillips. The new studios were completed in May, 1947.

KSOO and KELO were the only radio stations in the city until KNWC went on the air in 1946. KISD was the next station, inaugurating service on May 6, 1948. KSOO and KELO also were the pioneering television stations in the eastern part of the state. Joe Floyd of Sioux Falls, and Eddie Ruben and N. L. Bentson, both of St. Paul, Minn., purchased KELO (the radio station) on May 1, 1952. Ruben and Floyd had been in the theater business in Minnesota and South Dakota. Bentson was operating WMIN radio in St. Paul. Floyd was named president of Midcontinent Broadcasting Company, the new owners of KELO-AM.

Soon after the change of ownership of KELO radio, Midcontinent applied to the Federal Communciations Commission for permission to construct a television station. The construction permit was granted on November 19, 1952, for KELO-TV, channel 11. The station went on the air on May 19, 1953, providing television programs for homes in South Dakota, northeastern Nebraska, and the adjoining areas of Iowa and Minnesota.  KELO-TV was one of the few stations in the nation to go on the air without TV cameras. At the outset, the station used only syndicated films. All local programs were produced on 16 millimeter film. In the next four years, Midcontinent built two satellite stations to serve additional areas of eastern and northern South Dakota. KDLO-TV went on the air in September, 1955, in Florence, to serve Watertown and other communities in the northeastern corner of the state. The second satellite, KPLO-TV, started operating on channel 6 from Reliance, in July, 1957. The stations carry CBS programming. KSOO-TV brought NBC programming to South Dakota, with inauguration of service on channel 13 starting July 31, 1960. The only other commercial stations in the eastern part of the state are KCOO-TV (originally KXAB-TV) in Aberdeen, and KORN-TV, Mitchell. John Boler, a North Dakotan, put KXAB on the air November 28, 1958, with studios in Aberdeen and transmitter at Conde, SD. This station was sold to KSOO-TV in 1969. Its call letters were then changed to KCOO and it became a satellite of KSOO, Sioux Falls.