A Construction Permit was granted November 5, 1958 by the Federal Communications Commission for 1590 kilocycles with 1,000 watts daytime hours only at Pierre, South Dakota, to the Great. Plains Broadcasting Corporation. The owners were Daniel C. Lesmeister (then Production Manager at KOTA-TV in Rapid City; Edward N. Davenport (Technical Supervisor, KOTA-TV); Kenneth R. Hankins and Keith R. Hankins (both transmitter supervisors for KOTA-TV) — each holding 25% interest in Great Plains. At last report Lesmeister was with a TV station Texas and Davenport operates an Antique Car Museum in Chadron, Nebraska.

Estimated construction cost for the station was $9,760; first year operating expenses predicted at $30,000; while the first year anticipated revenue was $36,000. Call letters KCCR (for “Capitol City Radio”) were assigned by the FCC in late November. The group was anxious to install “a modern radio station” at Pierre/ the SD state capitol… to join the pioneer KGFX. KGFX, on the air since 1927, was operated by a widow from 9:30 a.m. to 2 p.m., and 4 p.m. to sunset.

Airdate was February 4, 1959. Ed Davenport was President and co-owner, as well as co-General Manager, while Dan Lesmeister was Secretary-Treasurer and co–General Manager. The transmitter was located east of Pierre on SD highway 34, on land owned by Toby Tyler. It’s just east of the Pierre Municipal Golf Course and the Golf Course Housing Development. The tower, a 200 footer, had been purchased and dismantled at the SD School of Mines in Rapid City. Original studios were located in the building housing the Harding Ford Garage…”about 119 West Sioux” in Pierre. The First National Bank is now located on that corner. The founding group sold out in 1960. Acquiring the Great Plains Broadcasting Corporation on April 1, 1960 was Leroy Okerland (originally from Sisseton, a USD Basketball player, who helped the Coleman family put KOLY, Mobridge on the air. Now deceased); Warren May (Pierre Attorney); and one other transferee, paying $40,000. (Charles Burke of Bankwest and former. Federal Judge Don Porter were involved. Both have talked about their involvement). Also a Dr. Holland from Chamberlain was supposedly involved). FCC approval came on March 30th. Mr. Okerland, who at that time, or shortly thereafter, got Great Plains involved with KCOG, Centerville, Iowa, became President. Hank Dais was named General Manager. Studios were moved that year to 331 1/2 S. Pierre. That’s above the Hollywood Shop, a ladies apparel store. Mr. Dais left KCCR in early 1961, and Mr. Okerland also left about that time. M.J. O’Leary (now deceased) was named General Manager.

Warren W. May became President of Great Plains in 1962. W. W. Worley, who came to Pierre from Galesburg, Illinois, was appointed General Manager of KCCR in 1963, and that year the station became affiliated with the Mutual Broadcasting System network. O’Leary had worked out a system of feeding Mutual from KIJV, Huron, to Pierre on leased telegraph lines from Chicago & Northwestern Railroad, on war surplus FM sub-carrier equipment. Names involved with the station during this time were: Scott McIntosh, Shane Siren, Gary Enright, Donna Youngberg, and Jerry Zastrow. The station broadcast from 6:00 a.m. to local sunset.

KCCR was sold by the Great Plains Broadcasting Corporation on May 16, 1964 to Capitol Broadcasting, Inc. Neal P. Edwards (now deceased) was President and 49% owner. Comet W Haraldson (still living in Pierre) was Vice President and 49% owner. Their respective wives each owned 1%. Edwards and Haraldson came from positions at Channel 9-TV (then KXAB-TV, now KABY-TV, Aberdeen). Edwards was General Manager and Haraldson was Chief Engineer. Mike Hatch and Larry Dirksen were familiar names on the staff during this era. KCCR dropped Mutual in late 1964. On February 8, 1965 the FCC issued a change of frequency from 1590 to 1240, kilocycles, fulltime operation. For a short period of time they operated 250 watts day and night, and then in late 1965 were granted approval to raise the day power to 1,000 watts. This was accomplished in 1966.

The change of frequency was accomplished by Edwards and Haraldson working with their Washington attorney, Keith Putbrese. Putbrese put together all the paperwork and filed with the FCC. Then he asked Edwards and Haraldson to use whatever political pull they had. They tried Senior Senator Karl Mundt first, and Mundt politely told them that because of the political climate in Washington at that time he could do nothing, but suggested they try South Dakota’s other Senator, George McGovern. McGovern’s office agreed to help and they would have someone from their office call the FCC every week and check on the progress of the application. Putbrese explained it to Haraldson this way — everytime the Senator’s office would call the FCC, the FCC would search out the application, conveniently move it forward for more immediate consideration…the process worked.

Side-light: As Haraldson and Edwards were preparing the application, across town Dean Sorenson who was running KGFX (200 watts-630kc) had also discovered the 1240 frequency. When KCCR filed, Sorenson abandoned his project, on the basis of the fact the new frequency would increase the KCCR coverage, but decrease the KGFX coverage….therefore KCCR would probably in a contested situation. Later Sorenson moved KGFX to 1060KHz.

Again the station was sold, on August 15, 1968, to Agruss Broadcasting, Inc….for $105,000. Agruss was owned by Nathan Agruss, 50%, and Jordon Ginsburg, 50%. Agruss was President and Ginsburg was Secretary-Treasurer. Agruss was Ginsburg’s father-in-law. Ginsburg was the driving force, and Agruss was never involved in the broadcasting business. Agruss Broadcasting also owned KHAK, Cedar Rapids at that time. The KCCR transfer to Agruss was approved by the FCC on July 31, 1968. Tony Dean (Anthony Dechandt) was Station Manager until March 1970, when he left to become an Aid to Governor Frank Farrar. When Farrar was defeated for re-election in November 1970, Dean became involved in promoting stock car racing, and a series of outdoor shows. He still lives in Pierre and has a national following for his hunting and fishing shows and seminars.

From March 1970 to August 31, 1970, there was a fellow from Iowa who assumed the Management. Our records fail to indicate a name. September 1, 1970 found Dean Sorenson named Manager. From 1962 to 1969, he had been involved in ownership and management of KGFX. He returned to Pierre to run KCCR for Agruss, and almost immediately, KGFX’s Program Director, Fred Smith (Mr. Freddie) joined him. KCCR affiliated with the regional Intermountain Radio Network for sales purposes only. Later IMN provided the ABC Network feed to KCCR. On December 1, 1970, KCCR moved to new offices and studios, at 110 W Capitol. The former 835 square foot Fabric Store gave the station a “street window” control room. This was “home” until December 1975 when the station moved next door to the Hemminger and Sorenson Building at 106 W Capitol.

KCCR was sold March 1, 1972 for $115,000 to Sorenson Broadcasting Corpn., owned 50/50 by Dean Sorenson, the station’s Manager, and Sioux Falls businessman Thomas “Jerry” Simmons. Sorenson then became both President and General Manager. In 1972 KCCR joined the ABC Information Network, remaining an ABC affiliate until 1984 when it switched to CBS.

In 1975 Thompson became Manager. Gerry Norine was hired from KCHF, Sioux Falls to become a Sales Person, and soon was named Sales Manager. June 1, 1976, Sorenson bought another property….KWAT AM/FM, Watertown, South Dakota. Jim Thompson moved to Watertown to manage those stations, and Gerry Norine took over KCCR. Norine left in May 1977, and August 1, 1977, Mel Moyer from KBAB, Indianola, Iowa moved to Pierre and assumed the position. He remained there until November 15, 1984.

In 1975 a new Harris MW-1 Transmitter was installed at the station, making it one of the first all-solid-state radio stations in the Nation. In April 1981, the original transmitter site was abandoned, and moved to Izaak Walton Road, next to the Izaak Walton Clubhouse in Southeast Pierre. A new antenna, ground system, building, remote control, and tuning network gave KCCR the best possible RF Plant. At the same time, it’s new sister-station, KNEY-FM (now KLXS-FM) signed on, at 95.3 MHz on the FM Dial. Pierre’s first FM service….in full stereo.

From November 15, 1984 to 1987, Gary Drake was Manager of KCCR. Drake, a native of Watertown, had been with Sorenson at KWAT & KIXX as Sales Manager. In December 1986, Dean Sorenson redeemed Jerry Simmons 50% interest in Sorenson Broadcasting, thereby owning 100% of the stock. 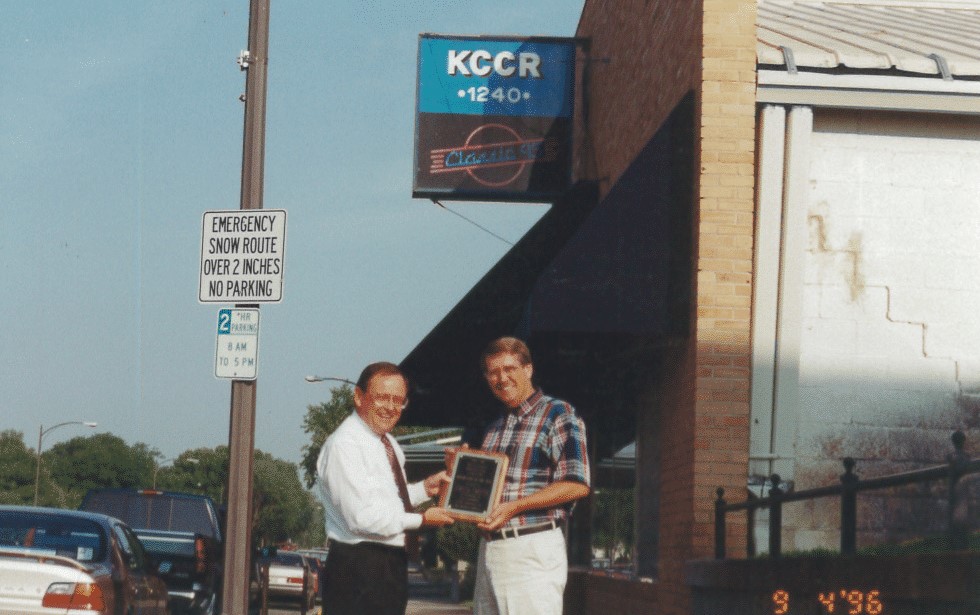 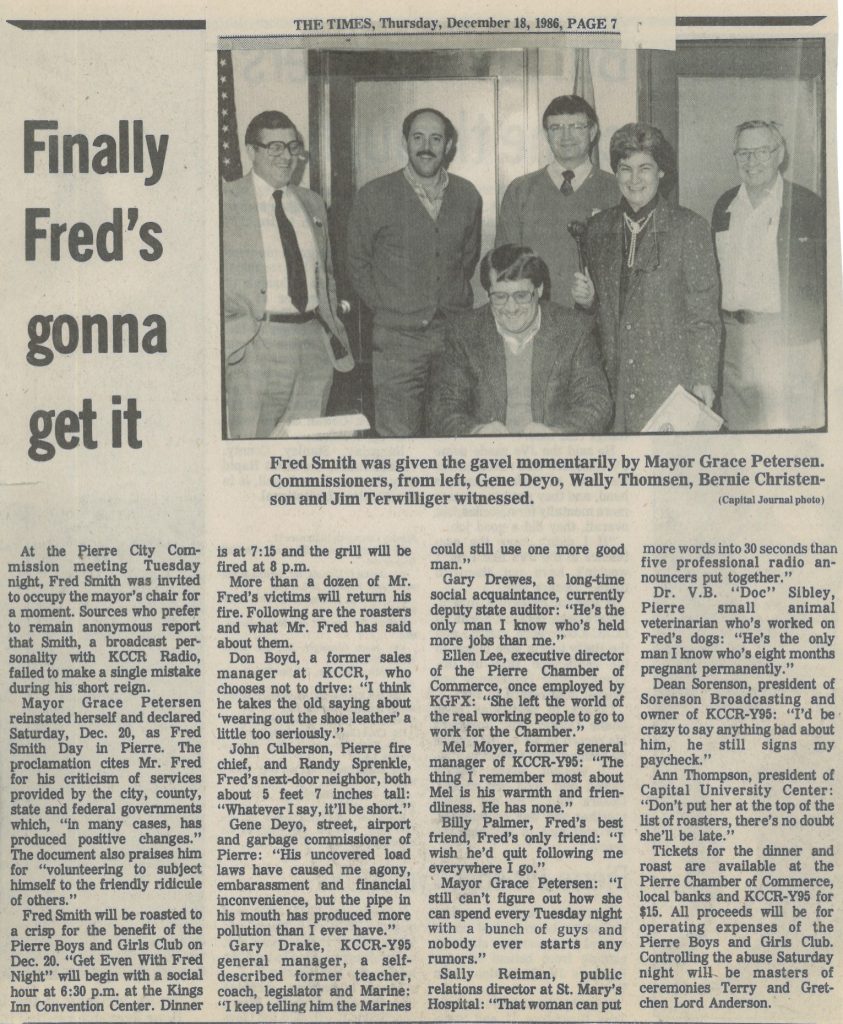 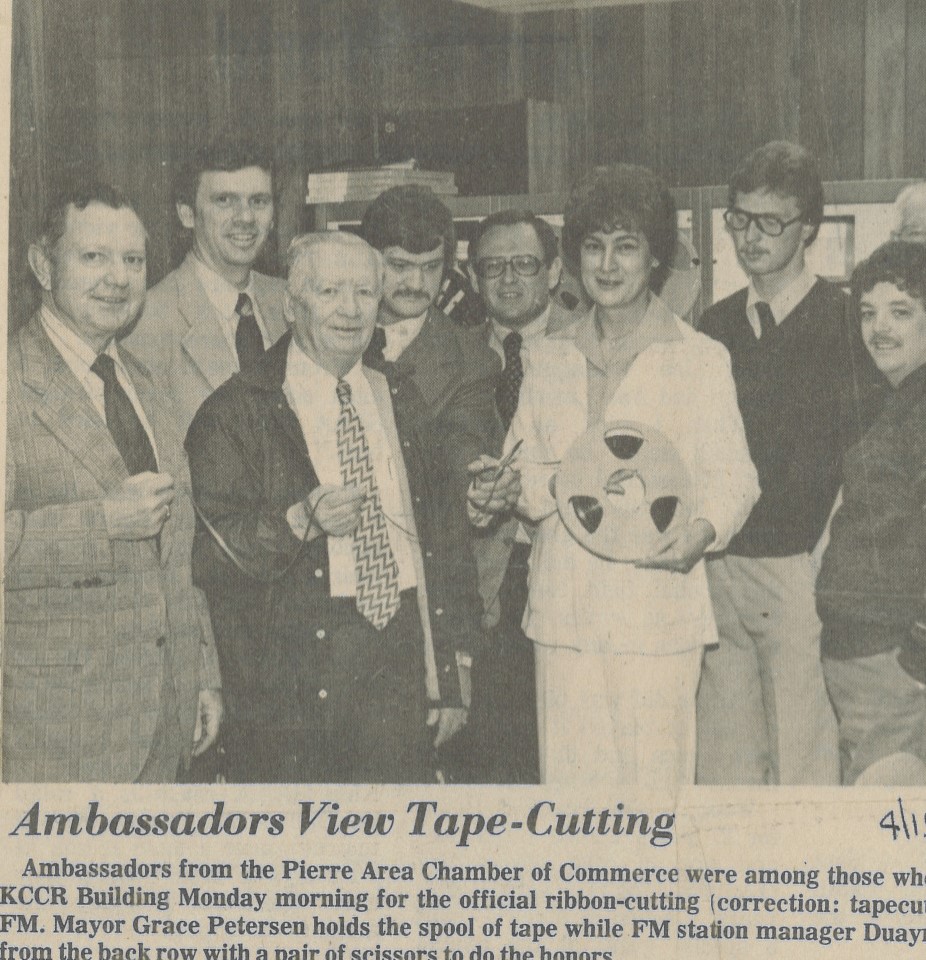 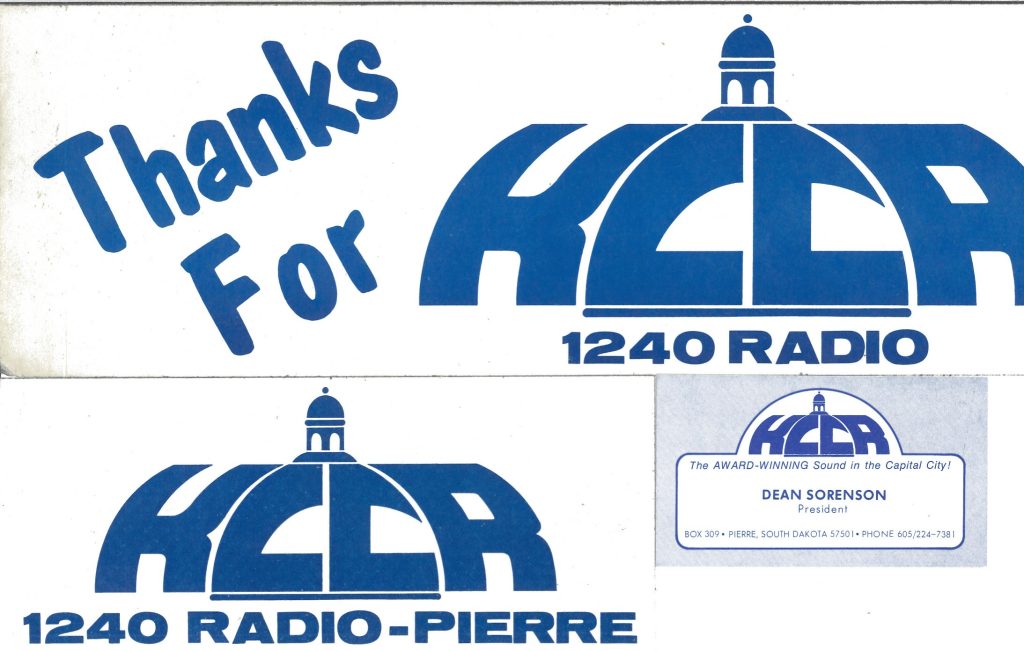